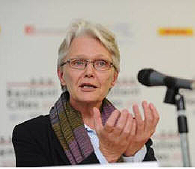 Margareta Wahlström is the United Nations Special Representative of the Secretary-General for Disaster Risk Reduction. She is Swedish and has an academic background in economic history, political science, social anthropology, archaeology and philosophy of science. Her career in international disaster response and humanitarianism spans over 30 years. She has occupied numerous positions within the UN that have allowed her to work in more than a 100 countries worldwide.
Current secretary General, Ban Ki-moon, appointed her to her position in November of 2008, the year in which the position was created. The purpose of the position is to lead and oversee the UNISDR. In particular her role is to increase support and international cooperation for the Hyogo Framework for Action. This framework details the necessary work required from various sectors and actors to reduce disaster losses.

How to tackle disaster risk reduction in an Asian context

Bangkok, Thailand - Asia is home to the most rapidly growing economies in the world. Even at the height of the global economic crisis in 2011 growth in the region was staggering. In China, the economic growth rate was over 9%. In India, the economic growth was over 8%. These rates were over double that of the fastest growing European economies, whose growth were only 3%. With development and rapid economic growth however, comes risk. On March 24, 2011, Ms. Margareta Wahlstrom, United Nations Special Representative of the Secretary General for Disaster Risk Reduction addressed this issue and discussed how Asia should approach disaster risk reduction in the oncoming years.

Eight goals, one vision
At the UN Millennium Summit in 2000, 8 international development goals were agreed upon by the 193 Member States of the UN to be accomplished by 2015. These goals, are known to us now as the UN Millennium Development Goals. Among the MDGs include the eradication of poverty and hunger, achievement of universal primary education and adoption environmentally sustainable practices.

Disaster risk directly undermines these goals. Where it is easy to see the correlation between the adoption of environmentally sustainable practices and disaster risk reduction, the connection is not so apparent when considering other goals. Nonetheless, there is a correlation.

Ms. Wahlstrom used the achievement of universal primary education as an example in her lecture, "If you are going to get 100 million children to school... and the schools are not built to standards that keep the children safe, is there any better example of a wasted effort than that?"

She went further to point out that inequity in social constructions when applying disaster risk reduction measures, also deterring the achievement of the UN MDGs.

"Disasters in themselves aren't discriminatory, but they really reinforce social patterns of inequality. If we are not conscious of mitigating against that in our planning we will in fact work against those very same objectives that we are trying to achieve in the eradication of poverty, development goals and also, of course, reducing disaster risks", Ms. Wahlstrom stated.

Politicians are capable of fulfilling this task.

Furthermore, risk reduction may have more personal consequences to politicians. Ms. Wahlstrom quotes a government official speaking on the issue, "Disasters are among the worst things that can happen to a country, when they hit and if people don't think we as a government handle them well, we as ministers risk losing our jobs."

Thus, politicians have both personal and public reasons to pursue disaster risk reduction.

Ms. Wahlstrom ended her lecture optimistically by stating, that if leaders can meet on development goals they can surely also cooperatively determine how political leadership can support the cause of disaster risk reduction.