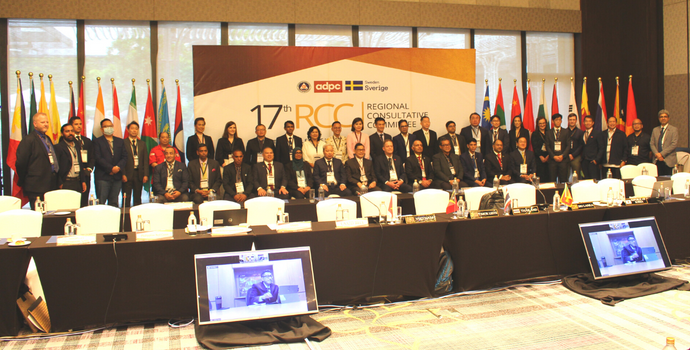 Participants of the 17th meeting of the Regional Consultative Committee (RCC)

The 17th meeting of the Regional Consultative Committee (RCC) concluded on 7 December 2022 with an emphasis on accelerating the implementation of the 2030 global, regional, and sub-regional frameworks.

Organized by the Asian Disaster Preparedness Center (ADPC) and the Office of Civil Defense (OCD), Department of National Defense, the Philippines, the 17th meeting was held for the second time in Metro Manila, the Philippines (the first time being in 2010 hosting the 8th RCC meeting).

With the overarching theme of ‘Sustainable Resilience Through Inclusive Governance, Finance, and Local Action’, participants discussed achieving the 2030 goals and targets through coherence and regional cooperation, strengthening the implementation of climate and disaster risk reduction through inclusive approaches, and advancing inclusive public and private investments and financing to build resilience.

After two days of thoughtful dialogue on a range of topics, such as data governance, gender-equal and rights-based approaches, transboundary and South-South cooperation on ensuring inclusive practices, and advancing public and private investments and financing, the 17th RCC meeting delivered the Manila Statement and RCC Road Map 2030 on Disaster Risk Reduction (DRR) and Climate Resilience (CR).

The Manila Statement calls upon parties to strengthen the linkages between the implementation of the global agendas at the national and local levels, promote inclusive practices for resilience building, and identify key actions on anticipatory and forecast-based risk financing mechanisms and leverage innovative financing mechanisms.

The Manila Statement also calls upon parties to explore opportunities for a trust fund mechanism that could be accessed to flexibly but transparently fund priority actions outlined in the RCC Road Map 2030 – the main outcome of the 17th RCC meeting. The RCC Road Map 2030 builds upon discussions held under the different themes and sessions and will be finalized through a consultative process, including a review by the RCC Steering Committee.

Mr. Jose Faustino Jr., Senior Undersecretary at the Department of National Defense, Philippines, identified the country’s progress in building resilience such as updating the National Disaster Risk Reduction and Management Framework and Plan 2020-2030. Mr. Faustino Jr. also highlighted the importance of promoting risk management. ‘We need to collectively strengthen our partnerships and knowledge exchange platforms in the Asia and the Pacific region not only in jointly mitigating the impacts of disasters but also in promoting the collective capacities of our countries,’ he said. 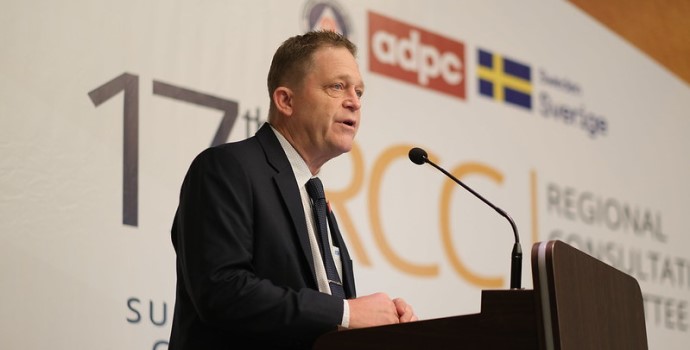 Mr. Hans Guttman, Executive Director of ADPC, gave an overview of the RCC’s achievements over the years and explained how the mechanism will transform into more of an action-oriented platform to further support member countries in achieving their goals and targets for DRR and CR. ‘We need to consider how we can develop a resourcing mechanism for implementing the RCC Road Map 2030 as we move forward,’ he said, adding that it will help promote national and regional initiatives and explore options for a trust fund mechanism.

Dr. Eren Zink, First Secretary at the Embassy of Sweden in Bangkok, Thailand, said that Sweden is pleased to support this meeting. ‘The focus of this meeting is especially timely given the important and ongoing Mid-term Sendai Review,’ he added.

OCD is the implementing arm of the Philippines National Disaster Risk Reduction and Management Council (NDRRMC).

The RCC mechanism seeks to promote consultation and cooperation on reducing disaster and climate risks. Established in 2000 with ADPC as its Secretariat, it comprises of National Disaster Management Organizations (NDMOs) from over 20 member countries across Asia and the Pacific region.

The RCC mechanism has promoted peer advocacy and the exchange of expertise in Disaster Risk Reduction (DRR) and Climate Resilience (CR) for the last 20 years. Today, ADPC facilitates the RCC as one of its main institutional organs.

For more information on the RCC mechanism, please visit www.rccdm.net