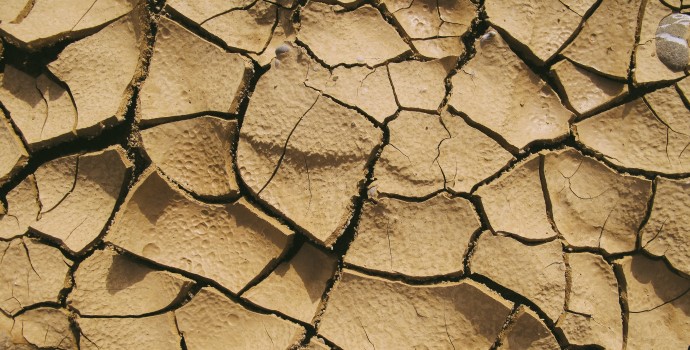 The theme for United Nation's Convention to Combat Desertification (UNCCCD)’s 2021 Drought and Desertification Day is to promote converting degraded lands into healthy lands.

Nearly three-quarters of the Earth’s ice-free land has been altered by anthropogenic activities, destroying the natural habitats of a lot of species. This alteration of land reduces buffer zones with COVID-19 pandemic raging across the planet—restoring the natural landscape helps in reducing human-animal contact, thus creating a natural buffer against zoonotic diseases.

Drought and desertification are closely related phenomena. Drought is a natural event that occurs due to prolonged deficiency of precipitation causing shortages of water whether it is atmospheric, surface water, soil moisture, or groundwater. It can be classified further based on the degree of severity.

Desertification, on the other hand, evolves due to the conversion of fertile land into less or non-productive land caused by non-adaptive human activity in combination with soil and climate factors.

We are all aware that climate change is expected to increase the frequency and intensity of drought all across the globe. Climate research in the last two decades shows that, since the second half of the 19th Century, global warming has accelerated the melting of ice masses leading to sea-level rise, increased water shortage and enhanced drought intensity, deterioration of agricultural systems, and many other changes.

The increase in frequency and intensity of drought events are likely to be observed in Africa, Asia, and Latin America, impacting food and livelihood securities of the regions. One of the recent major drought events occurred in Southeast Asia in 2020 (Thailand, Lao PDR, Cambodia, and Viet Nam).

The recent severe droughts in Lancang-Mekong Basin in China, in terms of both intensity and frequency, have affected water supply, irrigation, ecosystem, and navigation.

Drought causes a direct and substantial negative economic and health impact on farmers and others related to the agricultural sector. It also affects people in non-agricultural sectors with a widespread loss of services and scarcity of produces in drought-affected areas.

Drought monitoring and early warnings have been a priority for countries around the world. It is also the foundation of an effective proactive drought policy.

According to World Meteorological Organization (WMO), communication of reliable information through appropriate channels in a timely manner to water and land managers, policymakers and the public is essential to reduce vulnerability and improve mitigation and response capacities of people and systems at risk.

Major drought early warning systems currently in place are the National Integrated Drought Information System (NIDIS) in USA which is a multi-agency partnership of NASA, NOAA, USDA, and others, Mekong Drought and Crop Watch, and UNCCCD Drought Tool Box. Drought needs to be addressed holistically as it has multi-sectoral impacts and an integrated approach for management of the hazard is essential.

The three key pillars for effective drought risk management as advocated by Integrated Drought Management Programme led by WMO, Global Water Partnership and others are i) Monitoring and Early Warning; ii) Vulnerability and Impact Assessment and iii) Mitigation, Preparedness and Response.

The key concepts of these three pillars are:

Pillar 1. Monitoring and Early Warning:
• A drought monitoring and early warning system (DEWS) is the foundation of effective proactive drought policies.
• A DEWS identifies climate and water supply trends and detects the emergence or probability of occurrence and the likely severity of drought and its impacts.
• Effective drought monitoring and early warning must integrate precipitation and other climatic parameters with water information.

Pillar 3. Mitigation, Preparedness and Response:
• Appropriate measures and actions aimed at reducing the vulnerability to drought and reducing the impacts of droughts.
• Determine appropriate mitigation and response actions aimed at risk reduction and the identification of appropriate triggers.
• Subdivision of the measures into long-term, medium-term or short-term options to include development strategies of the concerned sectors, timely implantation of measures and emergency response respectively. 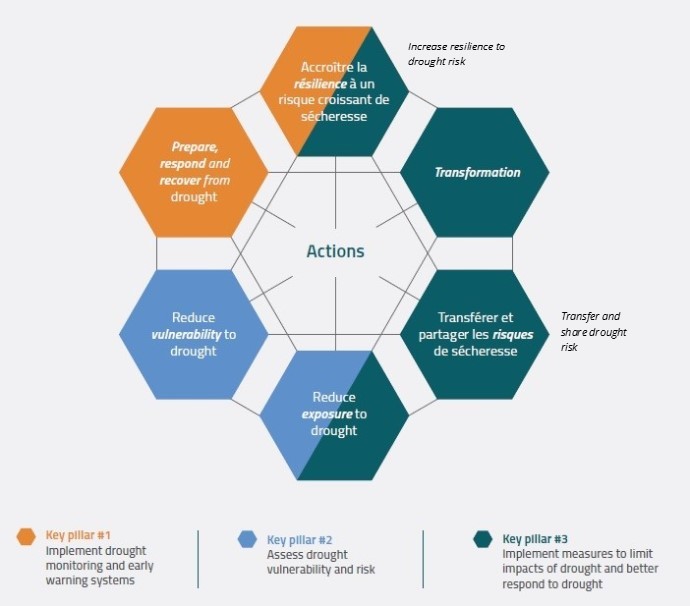 It is accepted that the likelihood of extreme weather conditions is increasing due to climate change. These climatic changes and extreme events affect the lives of millions of people and cause great economic losses.

Building resilience to these events and helping countries to become more water-secure requires an integrated approach to water resources management. Better management strategies based on scientific knowledge are in urgent need especially for drought-prone areas to ensure broader social and economic responses to manage the risks.

A demand-driven support mechanism for communities, countries and regions is required. One such initiative is the IDMP led by WMO and GWP which aims to provide policy and management guidance by sharing scientific information, knowledge and best practices.

Alignment of ADPC initiatives to the UNCCCD’s 3 pillars of DRM:

ADPC has been contributing to the 3 pillars of drought risk management through various initiatives supported by development partners and multilateral organizations.

Major contributions of ADPC initiatives have been with respect to Pillar 1 and Pillar 2, and to some extent to Pillar 3. ADPC has supported the National Hydro-meteorological organizations in Myanmar and Vietnam by organizing National Forums to respond to El Nińo that cause severe drought conditions where communities are generally exposed to extreme heat, water shortages and the potential spreading of diseases (Pillar 1).

The Mekong Drought and Crop Watch (MDCW) is one such initiative where an integrated web-based information system was developed to improve the operational, technological, and institutional capabilities to prepare for and respond to droughts in the Lower Mekong region (Pillar 1).

The system supports decision-makers with current and forecast drought indices using remote sensing data from NASA as its backbone. ADPC has also been carrying out drought hazard assessments in various countries in Asia and the Pacific in the agriculture sector to assess socio-economic impacts to local communities as part of synergy with IDMP Pillar 2.

Climate Adaptation and Resilience for South Asia funded by World Bank is one such initiative where drought risk assessments (Pillar 2) are being carried out for Pakistan, Nepal and Bangladesh to decide on various climate-smart initiatives to adapt and mitigate drought impacts (Pillar 3).

An increase in drought risks due to climate change in Asia and the Pacific requires robust drought monitoring and Early Warning System supported by drought risk assessments that are tailored to crisis response and mitigation.

ADPC is currently working in Southeast Asia with such approaches where multiple indices as indicators are being used to identify triggers of drought as part of the Drought EWS.

Climate inclusive risk assessments are being tested to understand future drought risk based on available climate projections where global climate models are being downscaled and bias-corrected for enhanced accuracy of hazard and risk assessment.

ADPC is exploring engagements with agriculture and water sector stakeholders to help adapt to and mitigate drought risks by enhancing the resilience of vulnerable farmers promoting climate field schools, customized adaptation options for different agro-ecological zones, water accounting for the agriculture sector, and strategies for surface and groundwater management to minimize drought shocks.

These initiatives being explored and implemented by ADPC in the region will enable better management of drought as well as enhance adaptation mechanisms to reduce the conversion of fertile land to non-productive ones.