Small farmers in most of the South and Southeast Asian countries are generally reluctant to adapt to climate change and opt for technologies for better crop yield. However, rice farmers in the Nilwala River Basin have changed their mindset. They are no longer entirely dependent on conventional farming techniques and practices. They are embracing innovative solutions and consulting scientific information, in a bid to combat soil acidity and salinity formed in their paddy fields due to the combination of climate change and a physical structure built for flood protection in the past.

Nilwala River, the largest in Matara District, the Southern province of Sri Lanka, often becomes a source of salinity due to tidal variation and flooding while traversing about 70 kilometers to discharge to the Indian Ocean in Matara. Farmers in the Nilwala River Basin are highly vulnerable to frequent floods, droughts, landslides, salinity and seawater intrusion.

“Paddy fields in the delta region of the river basin were vulnerable to flood and salinity, and the improvement of the drainage system for rapid flood water evacuation by the Nilwala River Flood Protection Scheme, coupled with the climate change, exposed the soil to the atmospheric oxygen, accelerating the formation of acid sulphate conditions and affecting 30,800 hectares of paddy fields,” said Professor K.D.N. Weerasinghe, who teaches at the Faculty of Agriculture, University of Ruhuna.

Under the Nilwala River Flood Protection Scheme in 1983, dams were constructed along the riverbanks that successfully protected urban areas from flood, but resulted in adding more to salinity and soil acidity. 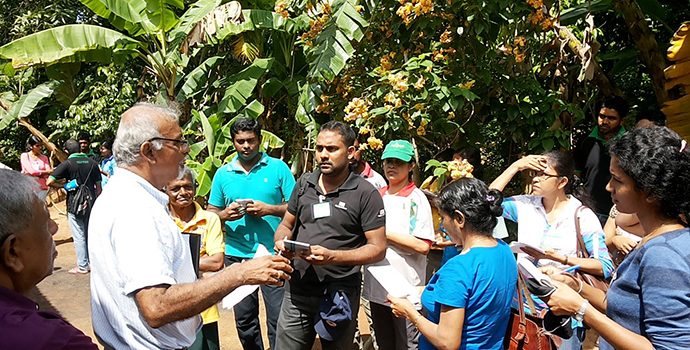 Low-cost technology and scientific information about weather patterns have helped farmers to identify innovative solutions for dealing with the climate change, soil acidity and salinity in the Nilwala River Basin.

With a population of more than 20 million, Sri Lanka has suffered from four drought spells and five large-scale floods since 2010, mostly due to climate change.

Rice is the main staple food in Sri Lanka, accounting for 39 percent of total dietary energy supply. The dry zones of the country form approximately 70 percent of the national paddy farming. A report on Climate Change Vulnerability published by the Ministry of Environment of Sri Lanka in 2011 notes that the dry zone area is highly vulnerable due to a prolonged drought season and diminishing precipitation. Rice is a water-sensitive crop; therefore, its cultivation is largely based on a river-basin oriented water management system.

In collaboration with the Faculty of Agriculture of the University of Ruhuna in Matara, Asian Disaster Preparedness Center initiated a project to restore the degrading paddy ecosystem in Nilwala River Basin. ADPC introduced low-cost technology as well as generated and shared scientific information about weather patterns and forecasts for paddy growers. The initiative engaged local farmers, officials and experts, which allowed farmers to not only voice their concerns and propose solutions, but also to learn about alternative options for dealing with climate change, salinity and soil acidity in the area. 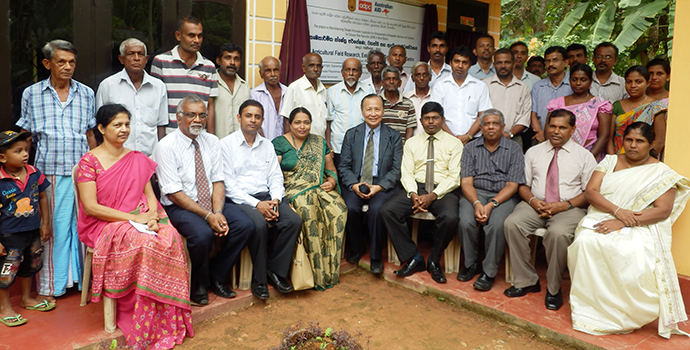 Previously farmers used to cultivate rice without taking much scientific evidence into account. However, the project helped local farmers with some innovative solutions that eventually became acceptable and viable techniques.

“We developed some technology which prevents the exposure of the soil to the atmospheric oxygen so that it will slow down the formation of acid sulphet conditions,” Prof. Weerasinghe said, adding that polythene mulching in paddy fields is an appropriate adaptation measure for weed management and soil moisture conservation in the face of droughts.

Installation of hand-operated barrel pumps designed by the University of Ruhuna was yet another low-cost and innovative technical solution. Similarly, paddy transplanting, fertilizer application, and the adaption of more susceptible varieties were some of the most common practices aimed at addressing the issue of salinity and soil acidity in Nilwala downstream.

After receiving hands-on training through on-site activities, farmers are now able to use the seasonal forecasting information as a decision-making tool. Farmers also learned how to achieve greater crop yields through different agronomical practices in terms of adjustment of cropping dates, different crop varieties, plant establishment methods, and appropriate solutions for irrigation during dry spells. For this to happen, officials from the departments of irrigation, agriculture, and meteorology, and experts from academia extended their technical support.

There is a growing realization that experts need to translate subject-specific terminology according to the local needs of the end-users. Farmers are not familiar with the technical jargon that the national-level source agencies use while disseminating weather forecasts, thus affecting the usability and outreach of essential information.

“Technical language that experts and researchers use is often not understandable to farmers. To address this fundamental challenge, we formed a management committee, which brought technical and farmer communities together for a more frequent discourse. Use of commonly understandable language and easy communication enabled farmers understand the value of technology,” says Dr. Senaka Basnayake, Head of Climate Change and Climate Risk Management at ADPC. 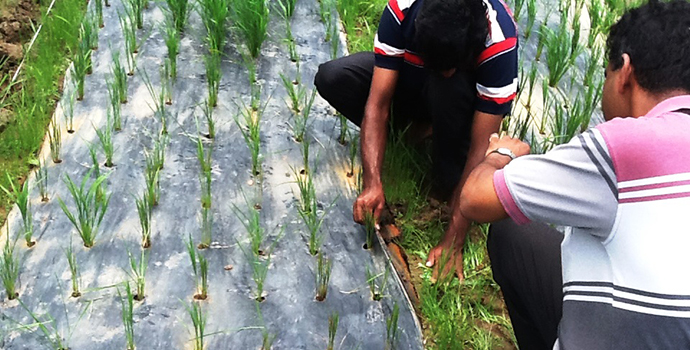 The farmers at the Nilwala River Basin introduced new rice varieties and adopted innovative rice cultivation techniques to protect their livelihood from the impact of climate-related disasters.

University students worked with farmers to find innovative ways to cut climate risk in Nilwala. This interaction created a win-win situation for both groups. Students got an opportunity to observe the impact of climate change on the ground. They carried out several experiments to introduce new rice varieties that are more resistant to climate change. Students dug deeper into research and produced outputs that are equally beneficial for farmers.

ADPC established a research and demonstration station at a site accessible to the majority of the farmers of Nilwala for collecting data, monitoring the weather, and analyzing climate variability. The active involvement at community level allowed farmers to engage in experimental activities on new rice cultivation techniques to be able to withstand climate-related disasters.

“The research station has become a common place for farmers where they gather at least once a week, and discuss problems with an irrigation engineer, agriculture specialist and other technical specialists. It is a good platform to discuss different issues emerging from the field,” said Prof. Weerasinghe.

Despite a steady shift from traditional to modern farming in Sri Lanka, most of the small farms tend to stick to their own farming methods and follow the natural indicators for crop cultivation. Movements of birds, emergence of insects from wet or dry lands, or behavioral changes of animals work as ‘weather
stations’ for many farmers.

More often than not, these traditional weather forecasting techniques can be misleading due to highly fluctuating climatic trends in recent years. Nonetheless, farmers are reluctant to deviate from centuries old cropping patterns and time-tested crop-calendars handed down to them orally by their ancestors.

“Farmers are reluctant to accept the fact that weather patterns are disrupted by climate change, and they keep following the same signs they have been trusting for generations. We must not undermine the value of indigenous knowledge, but it cannot be used to make long-term predictions,” Dr. Basnayake added.

At the outset of the project, ADPC found that farmers were generally aware of their challenges, such as low yield and salinity, being related to climate change, but that they preferred to address the issues through utilization of traditional knowledge. “New methodologies that are introduced through academic research are often not accepted by traditional farmers,” ADPC’s assessment report found.

“However, we accepted the challenge and started talking to farmers. In the end, we were able to establish their trust in the usefulness of scientific information and technology for improved rice farming,” said Dr. Basnayake while recalling the challenges of convincing farmers for a transition for their own good.